How the Evactron® De-Contaminator Cleans SEMs, FIBs and Other Vacuum Systems

The Effects of Carbon Contamination in Vacuum Chambers:

Volatile hydrocarbon molecules are an unavoidable constituent of all vacuum chambers.  They are introduced into the chamber through atmospheric (adventitious) contamination, lubrication, or inadvertent contamination by users.  This contamination does not pose an issue in and of itself.

However, if energetic radiation such as the electron beam of a scanning electron microscope, an ion beam from a FIB, or EUV radiation of the next generation of lithography tools is used, then the hydrocarbon contamination will cause problems. As the hydrocarbons adsorb onto a surface impinged by the energetic radiation, e.g. a sample examined in an SEM or a mirror in an EUV lithography tool, they will be chemically altered by the radiation and then recombine into less volatile polymers.  More adsorbed hydrocarbons will diffuse into the impingement area, and a buildup of polymeric carbon will occur.

In microscopes this buildup will reduce the image quality. When the user reduces the magnification, a black square due to the carbon buildup will be seen on the SEM image.  In EUV lithography, the mirror will also suffer a carbon buildup which will cause a reduction in the reflectivity of the mirror.  Less reflectivity will cause a much reduced throughput of the lithography tool. 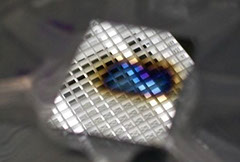 Carbon buildup leading to loss in reflectivity seen on an EUV mirror.

Removing Hydrocarbons and Decontaminating Vacuum Chambers with the Evactron De-Contaminator:

Plasma ashing and glow discharge cleaning of samples have long been cleaning methods available for sample preparation for SEMs and TEMs, but they require expensive auxiliary equipment. Argon and oxygen plasmas are normally used. Argon cleans via a sputter etching mechanism. However, sputter etch should be avoided because of possible damage to components within the chamber.

The Evactron Decontaminator, on the other hand, is a small device which is attached to any vacuum chamber allowing for direct in situ cleaning of the vacuum chamber.  The Evactron Decontaminator has a valve manifold which introduces a small stream of gas such as room air, oxygen or hydrogen into the vacuum chamber.  An attached pressure sensor is used to control the amount of gas flow.  The gas flows past an electrode energized by a low power (5-20 W) radio frequency (RF) generator.  This will create RF plasma localized in the region around the electrode.

The Evactron RF plasma creates radicals that chemically etch and remove hydrocarbons, organics, and surface carbon from SEMs and other vacuum systems. Contaminants are ashed into volatile products which are removed through the roughing pump.  As seen in the figure below left, the radicals are carried out of the plasma into the main chamber by convection. In the chamber they react with all exposed surfaces including the specimen if present. The plasma itself is confined to the Plasma Radical Source (PRS), which prevents ion bombardment damage to the instrument or specimen. 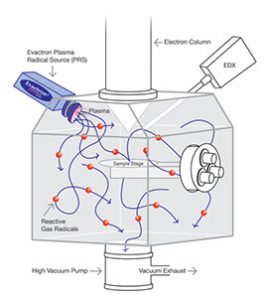 Cross-section of SEM chamber illustrates how the Evactron De-Contaminator removes hydrocarbons from the system. The plasma is confined to a small chamber on the left of the larger SEM chamber. Radicals flow through the SEM chamber; these are shown as convective streamlines. The radicals encounter and chemically etch contamination in the vacuum system. The products (CO2, CO and H2O) are removed through the Vacuum Exhaust. 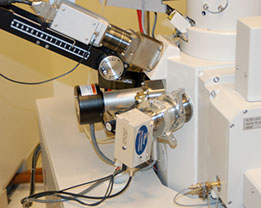 In low-power room air plasma a large amount of the electron energy is distributed to vibrational excitation of oxygen and nitrogen molecules (see Figure 2-32 on p. 66 in Plasma Chemistry by A. Fridman). Oxygen has a lower dissociation energy (5.1 eV) than nitrogen (9.7 eV), so these vibrational excitations are more likely to lead to oxygen molecule dissociation than nitrogen molecule dissociation.  A small fraction of oxygen molecules will be dissociated by electron bombardment to form oxygen radicals, and these radicals will leave the PRS and go into the main vacuum chamber.  Greater RF power will lead to a greater number of nitrogen and oxygen ions, which in turn will lead to the formation of secondary products such as NO.

The decontamination process generally begins with hydride extraction (hydrogen atom removal) in the contamination which creates more reactive sites. These sites undergo additional reactions by radicals which break down hydrocarbon contamination into volatiles.

For fluorocarbons the C-F bond oxidation reaction is very endothermic and these compounds are non-reactive. In silicon and on most metals a stable oxide layer has already formed on the metal and Evactron oxidation will not penetrate this oxide layer. 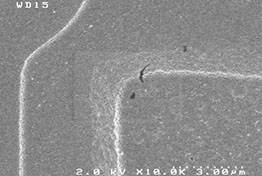 Removed contamination by Evactron cleaning results in no black square. 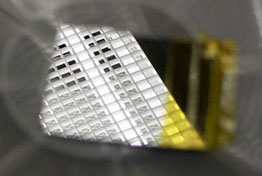 Carbon buildup removed from same EUV mirror shown above by the Evactron De-Contaminator. Yellow tape is covering right side of the mirror.