There are five ways to use the Evactron process to clean SEMs and specimens:

The Evactron Decontaminator consists of three parts. The Plasma Radical Source (PRS) mounts onto the vacuum chamber, and the Controller either fits on a tabletop or is rack mounted. A cable bundle connects the PRS and the Controller.

The Evactron Decontaminator PRS consists of a patented RF plasma electrode attached to a matching network inside a small vacuum chamber attachment. A metering valve assembly and a pressure gauge are also added to this attachment. The plasma produces radicals – atoms – as the active cleaning species. If room air is used, a small number of hydroxyl radicals are produced by the Evactron Decontaminator from the water vapor in the air. These radicals react with carbon containing contamination to make gas phase products such as H2O, CO and CO2 if room air is used. The EVACTRON system provides a N2 purge function for removing these gases after plasma cleaning.

XEI Scientific, Inc. offers adapter flanges for almost all SEM chambers which can be used to mount the Evactron PRS to almost any port. Custom adapter flanges are also available; please contact us.

Once the Evactron PRS is installed and connected to the controller, it is a good idea to pump down the system in order to make sure that Evactron installation has not introduced leaks into the chamber.

The Evactron De-Contaminator can be started by enabling the controller (separate instructions for each model) and then venting the chamber briefly so that the Evactron pressure gauge reads over 2.0 Torr. The Evactron Decontaminator will then automatically start cleaning. Once the chamber starts pumping down again, the pressure stabilized, the RF power turned on, and the plasma activated, the Evactron will begin cleaning.
NB: For Evactron C users, the needle valve on the PRS may need to be manually adjusted so that an operating pressure between 0.2 and 2.0 Torr is obtained.

DETERMINING THE CLEANLINESS OF THE CHAMBER

For SEM chambers, the cleanliness of the chamber is assessed by continuously imaging a clean Si surface at high resolution for 10 minutes, then lowering the magnification to see if a black square or carbon build-up has appeared. The appearance of black squares/carbon build-up indicates contamination in the chamber. This procedure can be repeated after separate Evactron runs in order to determine how much cleaning is needed. 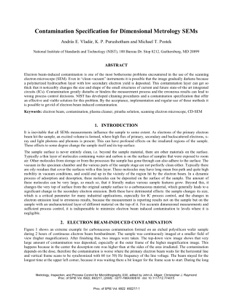 Details about this monitoring procedure.
Click thumbnail to open!

If the Evactron Decontaminator can stabilize a pressure lower than 0.4 Torr, a higher cleaning rate will occur. A stable pressure will result in a steady pressure reading (within ±0.02 Torr) for Evactron Decontaminator units with pressure gauge feedback (models 10, 25, 40 and 45). For the Evactron model C, users can determine if a steady stream of air is entering the vacuum chamber by gently placing their finger on the inlet and feeling for steady suction.

LENGTH AND FREQUENCY OF EVACTRON CLEANING

The Evactron D-C will clean contamination from accessible surfaces between the Evactron and vacuum ports. Contamination in crevices or other difficult to reach areas inside the vacuum chamber will not be easily cleaned by the Evactron De-Contaminator. After Evactron cleaning, this hard-to-reach contamination may migrate into the accessible areas of your chamber and eventually cause problems. The frequency of Evactron use will depend upon how long it takes for this migration to affect your results. As the chamber becomes cleaner, these migration effects will become less, and the frequency of Evactron use can be decreased.

The Evactron De-Contaminator will not remove fluorocarbons from the vacuum chamber. Also, a preliminary study has shown that carbon nanotubes are fairly inert to the Evactron cleaning process. The reaction with polymers such as photoresist is slow.

The Evactron De-Contaminator has been proven to remove hydrocarbon contamination from almost all SEM chambers.

Large Chamber Cleaning
The Evactron De-Contaminator has been proven to be able to clean the large chamber of CD SEMs. Longer cleaning times and higher pump speeds are recommended for the best results.

Long pump down times allow recontamination
Spending hours after Evactron cleaning to reach a higher vacuum is counter-productive. The Evactron removes contaminants in the critical areas of the SEM. They are then no longer in equilibrium with all the surfaces in the chamber. By a slow desorption process these unreacted contaminants will redistribute themselves in the chamber and contamination will return. Within 3 hours, migration of contaminants around a large vacuum chamber has been observed. It is well known that a single finger print can contaminate a whole vacuum system in 10 minutes under ultra high vacuum. Contaminant migration is also a big problem on other large chambers. Long pump down times are typically for water vapor removal, and water vapor does not degrade EM images.

Faster Pumps = Faster Cleaning
The Evactron maintains a constant cleaning pressure by varying the input leak rate to match the pump speed. If more radicals are needed for faster cleaning, use a roughing pump with a greater pumping speed. This will increase the gas flow rate into the plasma, which increases oxygen radical production, thus increasing the cleaning speed.

Please refer to the Documents section for the latest results for plasma cleaning with alternate gases by Vane et al..

Operating the Evactron De-Contaminator with Argon and O2 gas mixtures has been shown to be effective.

Operating the Evactron De-Contaminator with pure oxygen has been shown to greatly increase the cleaning efficiency. It has also been shown to reduce the rate of polymerization of hydrocarbons, which in turn reduces the time needed to clean the system. As with air cleaning, the best plasma pressure and power set-points for cleaning are dependent upon the size of the vacuum chamber and the speed of the pump used. Warning: Pure oxygen is highly oxidizing. Fire and explosion hazards exist if pure O2 is used with oil filled vacuum pumps.

For users who need a non-oxidizing environment, the Evactron De-Contaminator can be used with hydrogen gas mixtures. Preliminary experiments at XEI have shown that users will achieve the best cleaning rate if the chamber pressure is set to 0.1 Torr (13 Pa) for 20 W operation and 0.025 Torr (3.3 Pa) for 50 W operation.

Buyers of new CD SEMs and FIBs should specify that their tools be cleaned by the EVACTRON® system at the factory before shipping.

The Evactron Plasma Radical Source (PRS) is not designed as an ion source but is an ionized neutral radical and metastable source for chemically reactive species.  After leaving the plasma sheath, ions are quickly thermalized and neutralized as they enter the flowing afterglow that carries the neutral reactive species for cleaning.

Evactron® plasma cleaners are designed to use any oxygen-containing gas including air, O2, and Oxygen inert gas mixtures and can be adapted to other gases.  The Evactron E50 RF power can be adjusted between 35W and 50W to change the quantity of radicals.  The mean ion energy in the RF plasma varies by applied power, position, and pressure and has not been studied by us.  The cleaning species used are neutral O radicals in 3Ʃu state and are carried in a flowing afterglow out of the plasma into the chamber.  In air the afterglow is dominated by Nitrogen radicals.  The radicals in the afterglow are thermalized and do not carry the kinetic energy of the plasma ions.

The plasma ion energies are quickly thermalized and neutralized when they pass through the plasma sheath or hit the walls as they emerge from the PRS.  The plasma sheath outer edge is usually found less than 10 cm from the PRS exit.  The energies of the metastable radicals are quantum states and cannot be tuned. Only the quantity of radicals is changed by adjusting RF power levels.

Information on the energy of the O radicals and metastables may be found in:

It is not recommended to try to use the Evactron Plasma itself to do immersion cleaning with the plasma ions.  These ions have kinetic energy from the RF fields and can do sputter etch that is more aggressive.  The flowing afterglow does gentle chemical etch cleaning with neutral radicals.

Still have questions that we did not answer above?

Contact XEI Scientific, Inc. with any further inquiries. We will be glad to help you.